Amazing in Adelaide, now the Wallabies must be spectacular in Sydney

Come for the grand prize, stay for the vineyards and the city and the hills and the sun and such.

It was a bold plan considering the place was basically closed on weekends at noon on Saturday. Indeed, South Australia only introduced new legislation this year allowing shops to open before 11 a.m. on Sundays.

I love Adelaide, for what it’s worth, and spent a lot of time there in my old life in the mid-2000s. But even then, you could see why the ‘sleepy town’ narrative existed and where he came from.

So while the marketing for the event could absolutely have been better, and while the Wallabies really should have been in town all week in the preparation – especially with their AFL clubs’ seasons coming to an end – it was really a magnificent sight to see the Adelaide Oval bathed in sunshine and the stands packed with rugby fans from both sides of the Wallabies and Springboks contest.

Victory for the Wallabies would certainly have provided a major economic boost on Saturday night. Everyone I knew in town for the game had an annoying weekend and it wouldn’t be at all surprising to see the South Australian government trying to get more games.

(If the Eds are reading, I’d love to join you next time, please and thank you.)

Several days after the event, it’s hard to get past the 25 minutes before half-time as Australia put themselves in a position to win a game few dared to suggest out loud they could.

Handre Pollard missed his first attempt on the penalty spot in the 15th minute, and minutes later Fraser McReight made a crucial chapfer ruck on the Australian tryline and earned a tackle after being tackled high after the turnover . But from the alignment that followed, the Wallabies hit the ball.

Pollard fired another penalty from the left in the 22nd minute and then netted the Springboks’ first points of the game in the 23rd.

Then the home team really had to roll up their sleeves.

South Africa stole another Australian lineout then won a ruck penalty for the Wallabies who did not release the tackled player. The Aussies immediately conceded another penalty for pushing early in the lineout.

Rory Arnold found a lineout flight from the Boks throw, but the ball bounced clear and forced Nic White to ground it after winning the run. Line abandonment. No more ruck pressure, the Wallabies’ tackle count quickly matched that of the Springboks at this stage, and Tom Wright was shown the yellow card for being clearly offside.

It was a question of when the tourists would score at this point, not if.

But then a little twist. James Slipper won a 31st-minute scrimmage penalty, perhaps his only victory over Frans Malherbe from a set-piece. Two minutes later, Duane Vermeulen won a steal, but the ball beat Pieter-Steph du Toit into touch soon after.

The Wallabies took another lineout shot, then conceded a scrimmage penalty. McReight was then pinged for being offside at the maul, and then Folau Fainga’a received the team’s official warning for entering the following maul closer to nine o’clock than six. 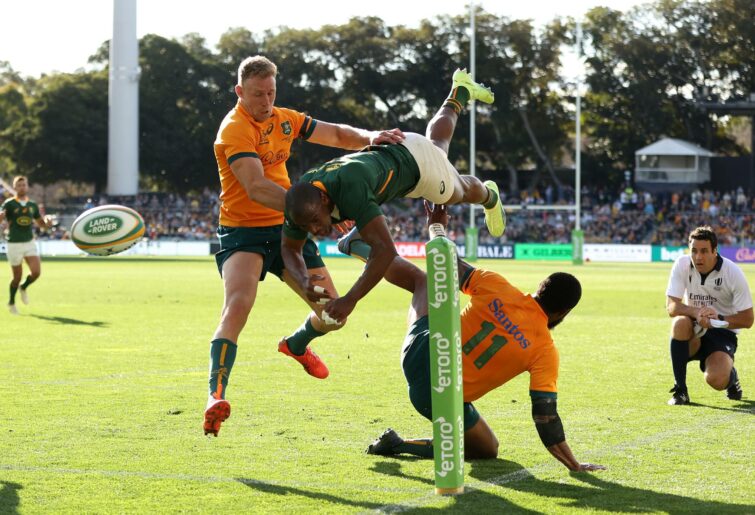 Two minutes later, the following: Faf de Klerk receives a yellow card for his shot on White. And whatever you think of White’s actions and how the card came to be, there’s no denying the fact that de Klerk got everything he was trying to do badly.

The Wallabies put the ball into touch at the first opportunity after the half-time bell, and somehow they had survived the onslaught. 10-3 at halftime. This must have given them a huge lift into the famed Adelaide Oval dressing rooms.

And maybe the best part is that they kept going.

Koroibete scored his try in the 47th minute, and ten minutes later James Slipper walked into first receiver and threw an inside pass to Noah Lolesio so good it would have been offensive, had he not been a carbon copy of a game he ran for the Brumbies earlier this season.

After McReight completed the move for his second try of the afternoon, 22-3 completely mirrored the contest.

Dave Rennie mentioned the start of the second half was a factor in the win, but the rapid loss of intensity in the closing stages is turning into worries for Sydney this weekend.

“We started the second half well again. I think the next 20 we probably dominated, and then, as you would expect from South Africa, they asked a lot of questions and came back late,” Rennie said.

“We are delighted with the result. We are well aware of the challenge next week and we support it, which we have not done this year.

And not just this year, to be fair.

In truth, his team consistency has been about as frequent as mentions of the World 12 lately – theoretically there somewhere, but it’s been dormant for a very long time now.

In Rennie’s 26-match tenure, last year’s five-game winning streak is the only time Australia have had a winning streak. Coincidentally, they also led those five games at halftime.

But there are five more wins in there that were followed by an immediate loss.

This year the ups and downs have continued: a win then two losses against England, a win and a loss in Argentina, and now a win against South Africa in Adelaide.

I feel like we could flip a coin to predict an outcome in Sydney, and Rennie was strong enough to repeat the effort.

“We talked about the respect that is earned on a daily basis, so we have to confirm that,” he said.

“And what we know is that the Africans are a hell of a team, and they’re going to be tougher next week as well, so we have to take our game to another level.

“We showed a lot of character in the game in Mendoza, but we didn’t support that. If we really want people to support us, we have to face it every week,” Rennie said.

He is right, of course.

Again, the Wallabies will be best judged not by last week’s effort, but by what they produce this coming weekend.

It was an incredible victory in Adelaide. But it can’t be spoiled by another substandard showing in Sydney on Saturday.

Planning your trip in 2023? Skip these places to save them Fodor’s tells…

Newfoundland’s fishing villages were built to survive, but Fiona changed the…